Following a tough debut season in the Sussex Premier Division, the Dunnings Squash First Team ended the year on a high with a win at home against Crowborough Firsts last weekend.

It’s been a difficult year in the county’s top league, but a win in the final fixture was a great way to cap off a season of high-quality squash. Facing off against professional and semi-professional opposition, not to mentioned some prodigal junior talent, has undoubtedly been a steep learning curve for the team this year, but we can really take pride in the application and spirit in which we’ve faced some challenging results.

This season saw us dip into the Dunnings ranks on numerous occasions, and despite other sides in the division often struggling to send a complete side, it’s been great that we have been able to rely on 12 members of the Dunnings rankings to aid our cause. A regular line-up of myself, Henry Bitmead and Ian Bellis was strengthened by the introduction of Alisdair Shapcott who ended the season as top seed.

Young Jamie Greengrass made a brilliant First Team debut for our away trip to Middleton, narrowly losing out in five games. Grant Miller returned from a year-long absence to make two appearances, Jacob Flack, Rob Greengrass and Neil Cooper also saw court time, the latter rewarded in the final match with his first win of the season. Jordan Holder Mansfield, Giles Cowdell, and Dan Sullivan also each contributed wins amongst their appearances for us this year.

At time of writing, our last win of the season has helped us jump out of last place to sixth in the league, with Crowborough to host Horsham this Friday coming to cement our final places. Regardless of our final league position we’ll be hoping to stay in the Premier next year, and look forward to another season of testing ourselves against some excellent talent.

Thanks to all our players and to everyone who’s turned up to support over the season! 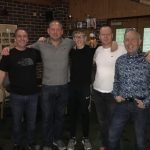 Junior County Accolades this weekendSingles
We use cookies to ensure that we give you the best experience on our website. If you continue to use this site we will assume that you are happy with it.Ok