The Dunnings Squash teams had an incredibly successful 2016/17 season in the Sussex Squash Leagues! It was an unprecedented season with 5 teams topping their divisions and gaining promotion. It just shows how the club is going from strength to strength. 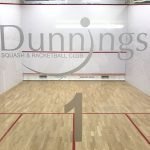